I've gotten a great variety of questions ranging from artistic to professional to healing concerns, and I've been enjoying the diversity of conversation. This month, though, I'd like to touch on something a little different. We all know that tattooing can have an ugly side- as the artistic standards rise to amazing heights across the profession, the garbage being done on skin by untrained scratchers just looks worse and worse. These folks are also all too willing to ignore the professional standards of having clean working procedures, working on sober clients only, and avoiding tattooing minors. This last one is a particularly upsetting subject, as you'll see in the example below. But I believe that even situations like this one can be resolved in a positive way with a great tattoo.

For any of you reading this who have teenagers in the house, show them this article. It's never too early to have The Talk with them about avoiding bad tattoos, because the reality is, they just don't know any better.

Q, from Mel: Im hoping you can give me some advice. I have a 14-year-old daughter who has recently been running away from home. In her last runaway effort she decided to have someone tattoo her. The first sight and news I had of this was a picture that had been uploaded on Facebook. Immediately I cried... A few days later I saw her in person and it's almost like someone has painted her with a glue gun, because the lines actually sit above the skin to the point where you could put your fingernail under them and peel them off... at that point I realised that they were very much real. They are across both her legs, middle thigh high. 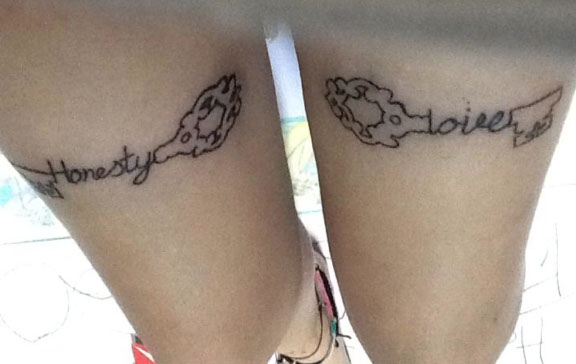 So my first question is, what has caused this? Can at some point they ever be removed? And my next question- considering the fact that clearly this is a backyard job and my daughter is 14, what should I be doing in terms of the law? I have always said that when the time came I would be happy to pay for a tattoo through a legit above-board tattooist to avoid this exact problem. My heartbreak is for other parents in similar circumstances (which there sadly seem to be many) who, unlike me, are not strong enough and annoyingly persistent enough to speak up, raise questions and push authorities to make a stance, or at very least investigate. Can you give me any information and advice please?

A: Hey Mel, that truly sucks... but at least the work is on her legs, not her arms or hands or neck, as many youngsters are doing these days. Hopefully she'll learn from the experience and you can both make the most of it.

Sounds like the tattoos are still healing. Does it appear to be infected? It's hard to tell in the picture... that would look like a red area around the scab, and/or particularly thick, persistent and painful scabbing, that kind of thing. If it's minor, a little antibiotic ointment (Neosporin etc) can make a big difference. Apply in thin coats several times a day after thoroughly but gently washing it with soapy water and drying it. If it's bad, though, take her to a doctor ASAP.

From the photo it looks like it's pretty much just outlines, but they appear to be pretty much carved in there. One problem with kitchen tattooers is that they tend to reuse their needles over and over again, causing them to get hooked, barbed and dull after all that mishandling. That's one of the reasons that work from these kind of practitioners is more likely to be scarred.

You'll need to let the work heal and settle for a while (6 months or so) to really know how dark or scarred it might be. Hopefully the skin will heal flat, although there's a good chance there will be permanently raised areas, especially with the lines being plowed in the skin like they are. At that point you'll have two basic options: The first would be laser treatments, which are really the only viable treatment that does not leave major scarring (don't let any dermatologist talk you into cutting out the skin and sewing it back together, I can't believe this is still considered a legitimate practice). Since it's just black ink, you may be able to remove the piece entirely with enough laser sessions. Remember that the tattoo will continue to fade for up to a year after the final treatment. But with carved-in and scarred linework, it's likely that there would remain a visible trace of the work even after a whole lot of expensive treatments.

The other option would be to make her wait until she is eighteen and then get a suitable coverup, although the piece might need 2 or 3 laser sessions to lighten it up enough for a good cover job. The last thing you want is to make the situation worse, so if re-tattooing the area is indeed an acceptable option, DO YOUR RESEARCH! Most importantly, make sure you've found a competent artist with an impressive portfolio who seems interested in taking on the project and appears to have a clear idea of where to proceed. Hopefully this could be a way of rebuilding a bridge with your daughter- the two of you could work together in doing the research, figuring out what she really wants, and finding the right artist for the job. By offering to pay for the repair work you can hopefully give her an incentive to not get scratched on again during the intervening years.

As far as the law goes... it's up to you to decide if you want to expend your energy there. The enforcement of tattoo age limits and licensing can be pretty shaky in some communities- I remember a guy who was scratching all over our town's teenagers and getting away with it until one day he tattooed five 15-year-old girls in their private regions... propositioned them, tried to take lewd photos, offered drugs, the whole shady nine yards. Even after their parents contacted the local police they got a very flaccid response, pretty much blaming the parents. It wasn't until they went to the local news station that the police found their mojo and dealt with the problem- which ended up involving jail time for the tattooer and a permanent ban on licensing him in this state.

So are you ready to chase it down? It might be a simple matter of calling the local health department, telling them what happened and giving them the scratcher's address. Sometimes they will swiftly descend on the house and at bare minimum confiscate the equipment... but sometimes it can take a real push to get a reaction. Health departments are sometimes more useful for this purpose than the police. But regardless of how helpful or unhelpful the local authorities are, you will likely need some cooperation from your daughter, and if this scratcher is part of her social circle that might be tough... but if she is willing to help you in fingering the miscreant and testifying against him, you'd both be doing the community a favor.

I've seen this situation before- often the parents are tattooed and are fans of tattoos, but they don't want their kid to get anything done too young... which leads to some kind of rebellious bad decision making on the part of the teen. Teenagers are not always your most rational thinkers, so even offering to pay for their first tattoo when they are of age won't always be enough to prevent this from happening. But in most cases that teen really needs their parents' support in understanding the mistake and turning it around into something positive.

So it's up to both of you, together, to decide if this incident is going to be an entirely negative one, or something that can make both of you stronger. A good tattoo experience can have the power to do that.