Epic Collaborative Projects How Much Can The Body Take

Many of you have been asking about collaborations, since multiple artist tattooing has become a popular and successful experience for many tattooers. There have been a lot of high-profile collaborative projects published recently in many different styles, and there is even an event, Two Of A Kind, that is structured around pairing up artists to work together on tattoos. I've personally been collaborating with other artists for most of my 26 years in tattooing, and since I just had a great experience finishing up a collab sleeve with Australian artist Evan Griffiths, I thought I'd take the opportunity to share some what just happened here at Hyperspace Studios.
Evan first came to the States in 2003 to get a sleeve from me, and in the dozen years since then I've watched his work mature into something quite impressive, with equal strengths in both biomech and Japanese. This sleeve project was actually started a couple years back during Evan's last visit in 2012. Our client Josh had been waiting patiently since then for Evan's return trip and had been psyching himself up for a marathon session to try to make the most of the opportunity. 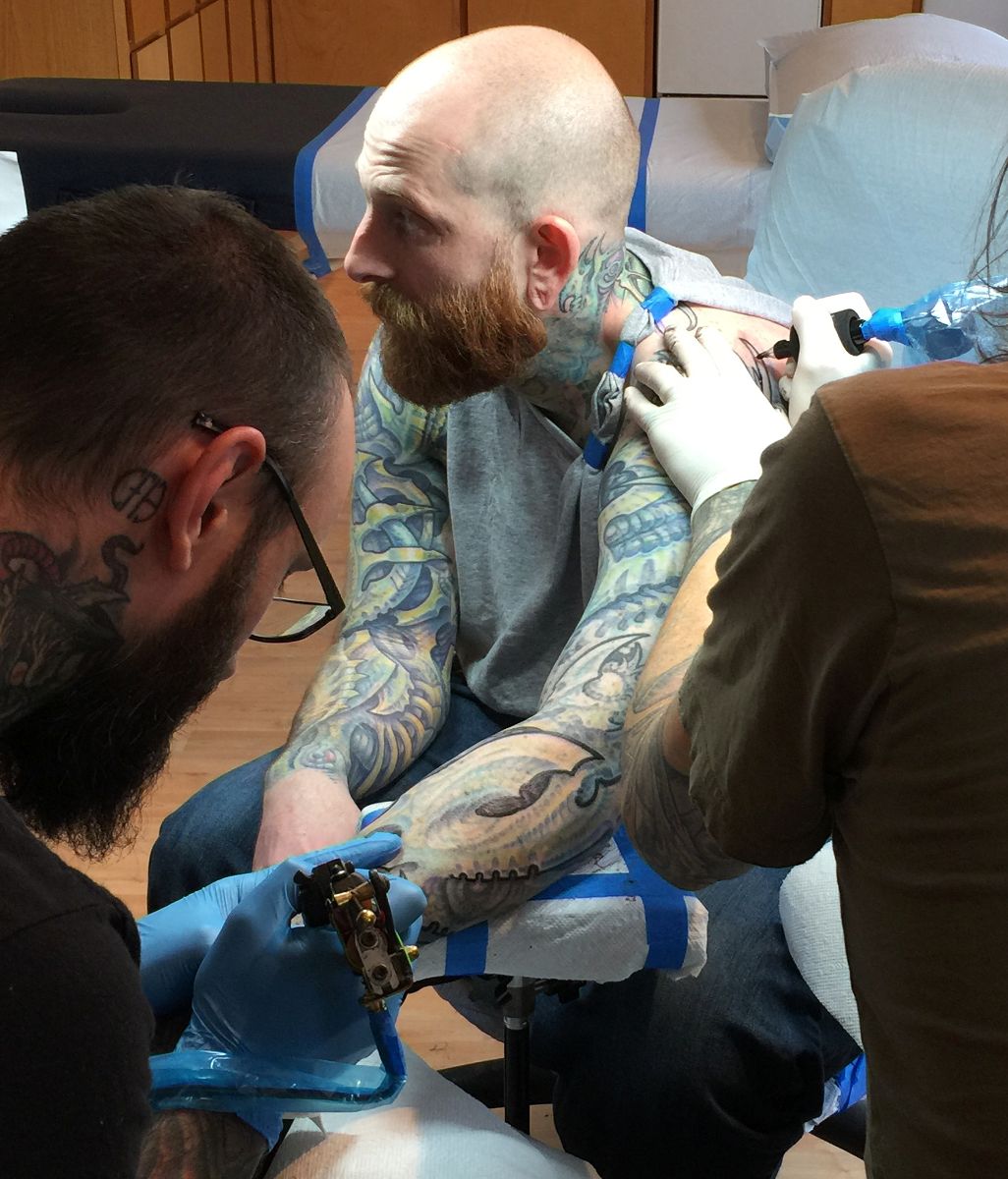 The initial visit had taken two full days, much of which was spent drawing on the skin in marker to try to make our design work the best way possible on Josh's arm. We were dealing with a laser coverup mess through the entire sleeve, although the flexibility of the biomechanical style allowed us to make the most of the situation. So in this return visit, where we had two more full days planned, it was nice to have everything already laid out in the skin, ready for color and detail. 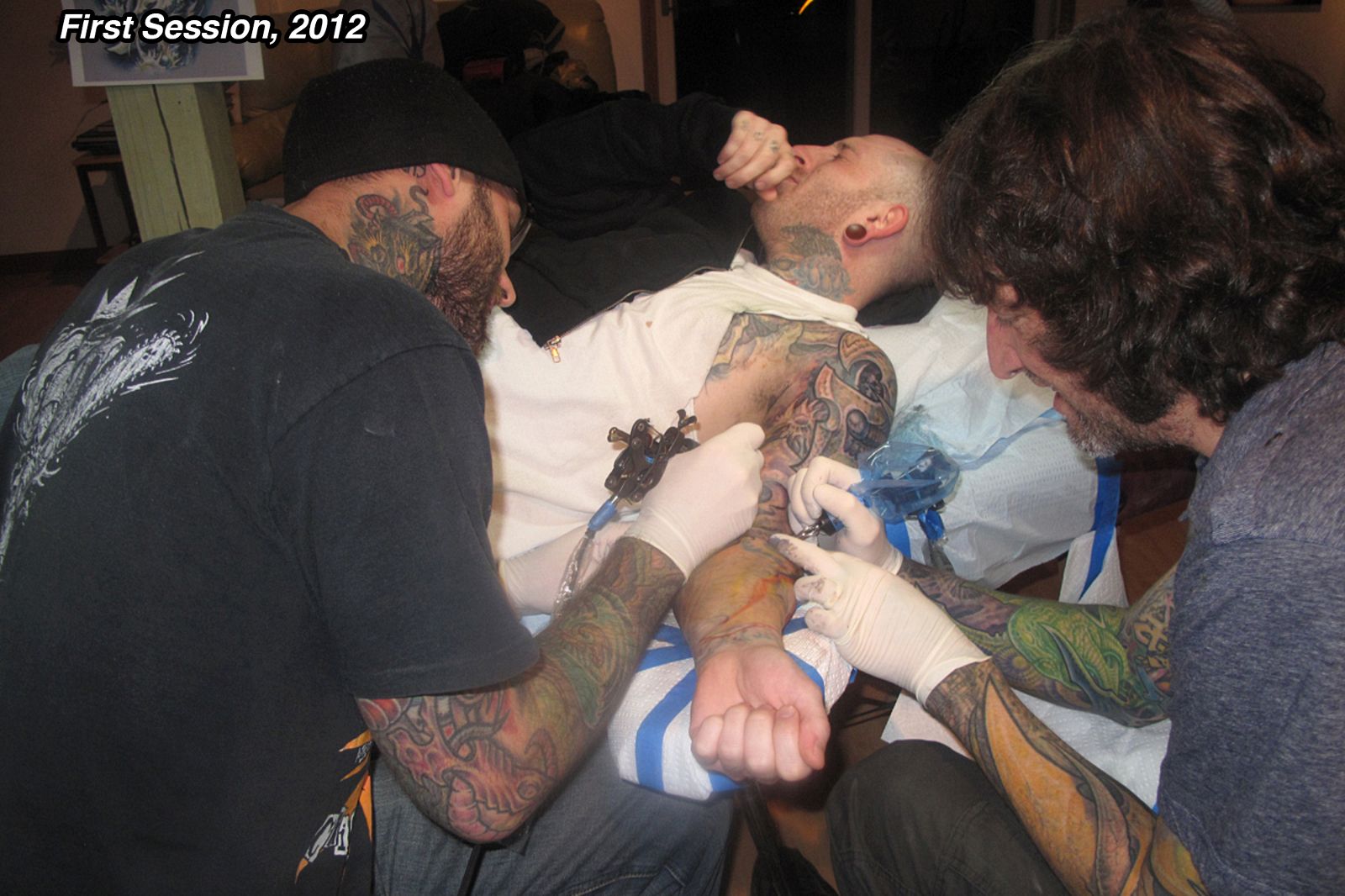 For most big collaborative projects like this, for much of the session both artists will work at the same time. This may sound like twice the pain, but I can tell you from personal experience that for most of the session it's actually not all that bad. When both machines are going at once it's hard for the brain to process the specific points of pain simultaneously, and it somehow gets more bearable. Most of the time. There are some parts of the arm that are just too sensitive to have two artists poking around at the same time, so we did have an hour or so here and there when we just took turns working solo.
There are a number of considerations for making this kind of marathon session not only less painful but also less tiring in general for the client. I generally don't recommend popping a lot of pills, since this can lead to unpredictable results, including sessions abruptly brought to a halt. Instead I rely on frequent rinses in Bactine, which contains lidocaine and can make a sizable difference as the day wears on (I don't wrap the skin with plastic with Bactine in place, I just rinse with it regularly). Ibuprofen helps too. But the big thing is for the artists to be smart and think ahead, to avoid going back into areas that were worked the previous day, and to be mindful overall in how they handle the client. It's possible to have incredibly productive sessions this way.

One thing that makes projects like this to turn out well is to have plenty of communication beforehand. For this tattoo, that meant a rough colored drawing, done part digitally and part by hand, so we could proceed at a good pace without having to worry about working against each other. We also poured identical palettes so we could keep our work consistent and make it easier to trade places from time to time. I think that's an important part of making a collaboration successful, having every part of the piece worked on by both artists, so we made a point of swapping places every hour or two. With a total of four days and probably 50 combined needle hours, we brought the piece to a satisfying finish. 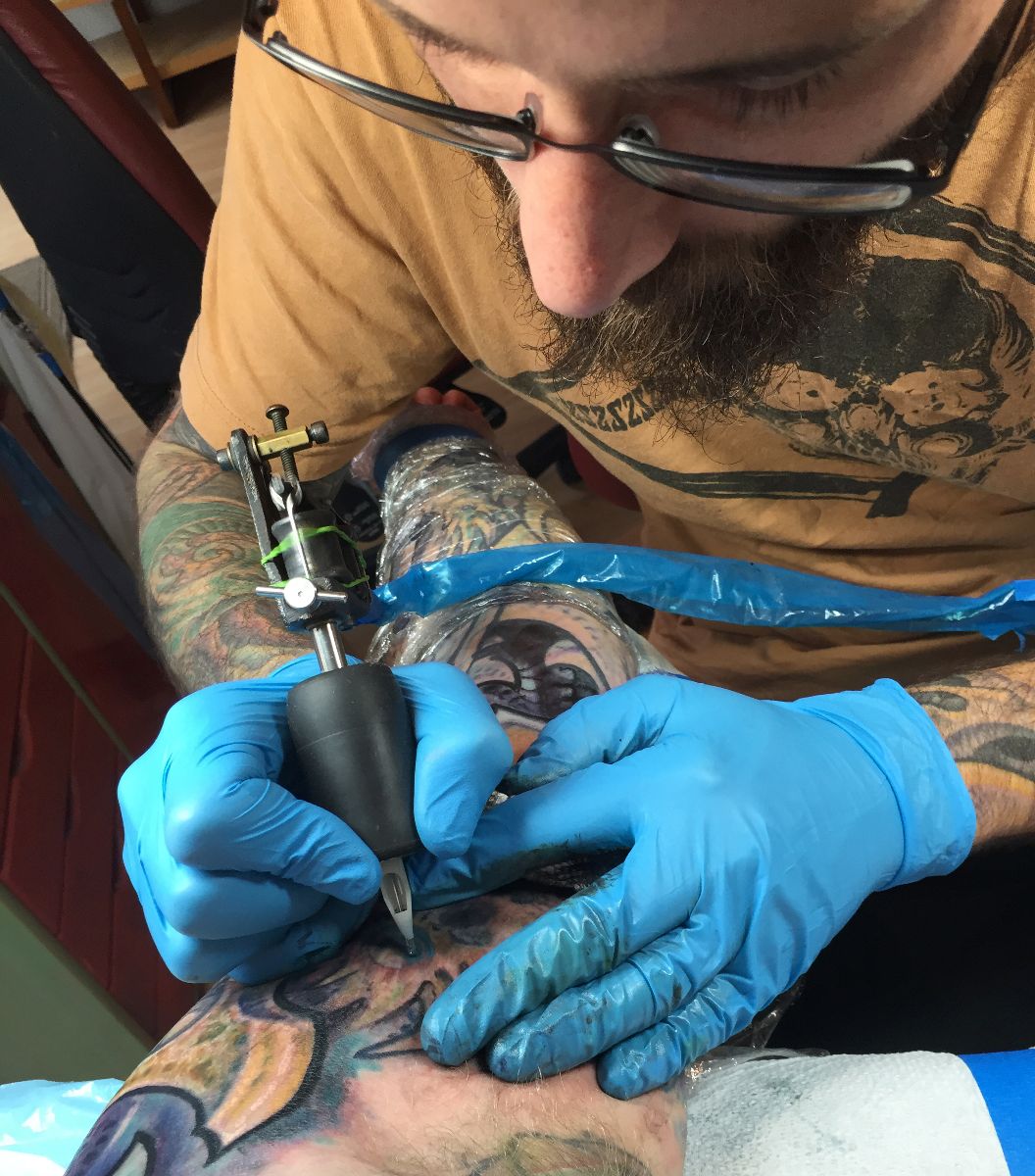 If you're a professional tattooer who wants to try collaborating with others, remember this: If you can draw it you should be able to tattoo it, so having a good drawing is a big part of making the project successful. It's also kind of important that you collaborate with others who are at an equivalent technical and artistic level to your own, and that there is a solid core of mutual respect there. Tattooing is an art form that is perfect for collaboration, since we are all taking influences from the same pool of ideas and working toward trying to make it look great on skin. 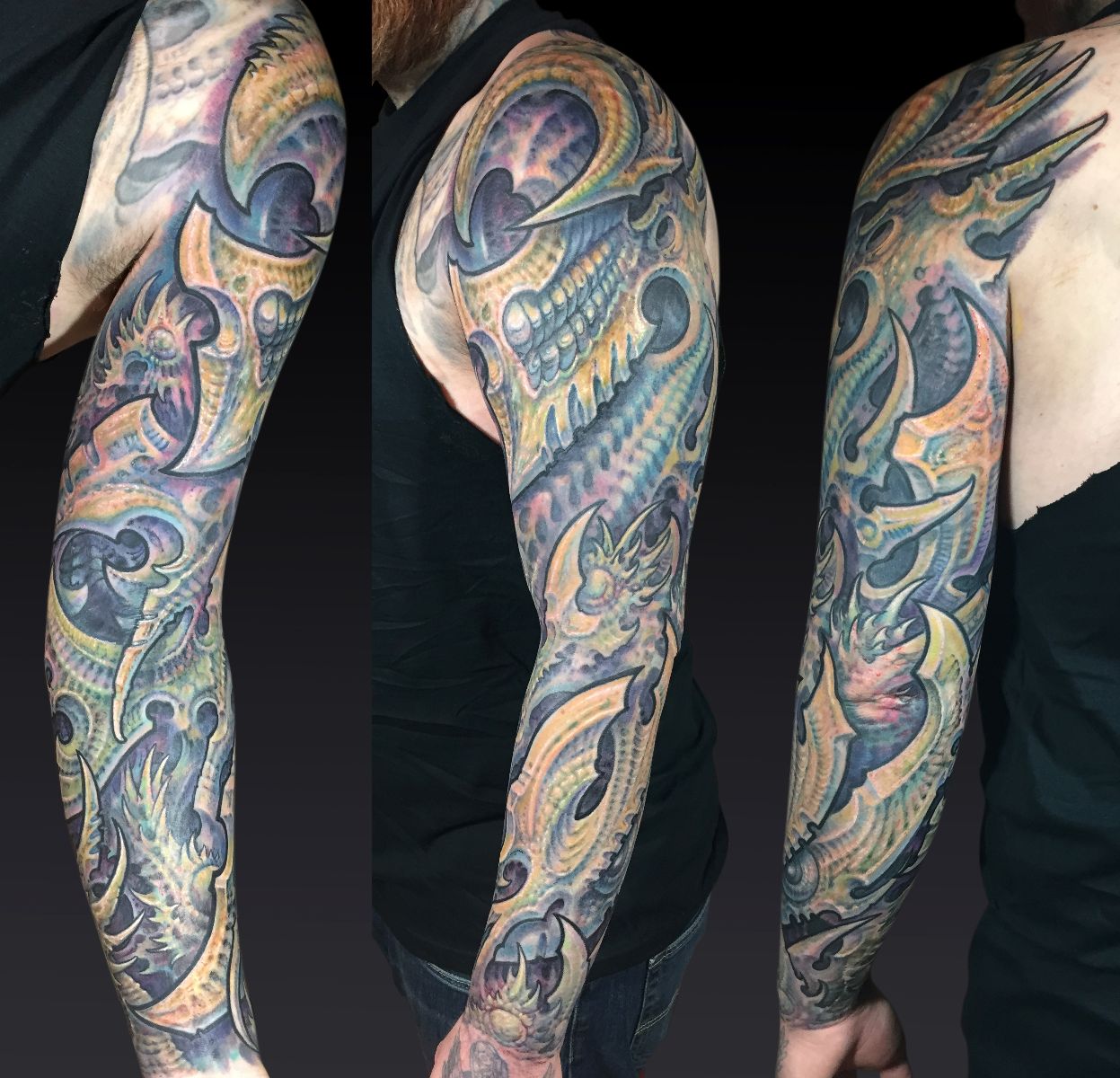