Lines and Edges A Critique Example

Lines and Edges: A Critique Example
The tattoo that I'm critiquing for the Lines & Edges example is by Cecelia, who was asked by her client to do a "Mother Nature" type piece that represents the progression of life and death. It's the type of illustrative tattoo that can contain a lot of elements and possibly become cluttered and hard to read if care isn't taken, and in fact Cecilia did mention that she had some concerns about clarity and readability, particularly with the skeleton hand. I do think that most of us are able to see the things that our work needs in order to improve, but it's not always obvious what to do in order to fix it.

Specifically, I'd like to talk a bit about linework here. Complex illustrative works can contain a lot of linework, and making all these lines speak clearly without becoming a tangle is part of the challenge. I usually try to think of the lines in terms of what they are doing:

1) The peripheral lines, which surround the primary design elements such as the head, are generally made bolder than lines around lower priority objects
2) Secondary lines, such as around the leaves, can be thinner or sometimes done in grey or color
3) Background elements are often lined with light grey, or their lines are hidden entirely during the shading process in order to help those shapes to drop back
4) When a line in a background element disappears behind a foreground object, sometimes it can be helpful to "drop out" the background line as it approaches the foreground object

This approach gives priority to the important foreground elements while avoiding competition with other parts of the design, ensuring the greatest clarity. 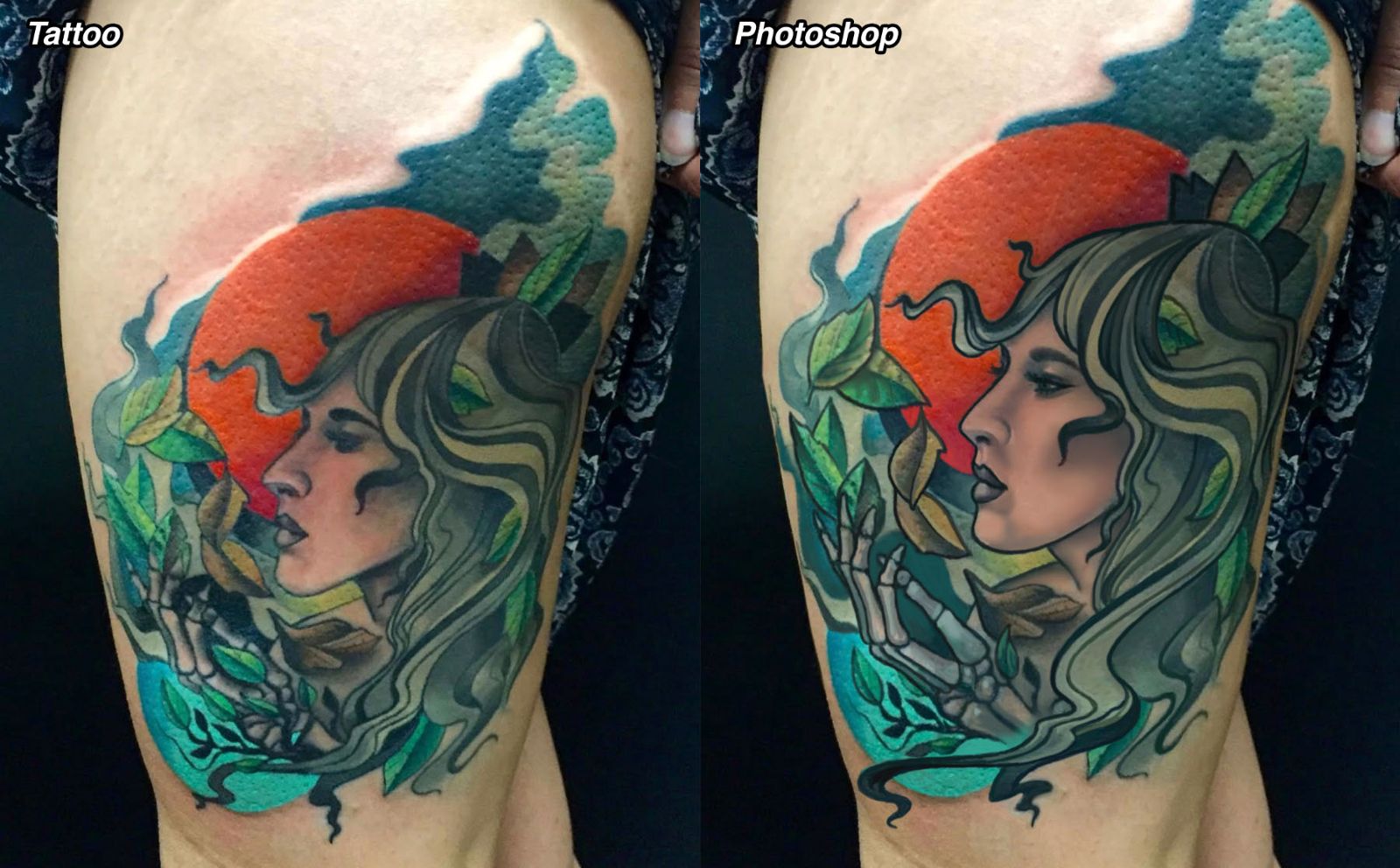 Before applying all this linework, I started by making the whole design larger. If you've been reading my column regularly (you can read other critiques at the Ask Guy archive at www.tattooeducation.com) you've likely noticed that I do this just about every time. What's the largest, within reason, that a piece can be made on a given canvas? Bigger means a better fit on the body, avoiding that postage stamp look; it also provides more space for rendering and places where you can introduce more flow into the design. So the whole thing has been sized up a few percent, and the stream of hair at the bottom has been made bigger so that it flows nicely all the way across the piece. I've made the face and skeleton hand bigger, allowing for more clarity, and softened the facial features slightly while aiming to keep her sort of "elven" appearance. Making the eye bigger and more clear was a big priority here.

From there, it's a matter of making a lot of small adjustments for the sake of clarity. Note the strong black peripheral lines around the head, face and hand. No other lines were made as strong; this gives the main elements visual priority, which is critical in a complex illustrative piece like this. When applying bold black lines, I prefer to use a medium sized liner like a 7 round and then sculpt the lines carefully, which makes for a darker, sharper and longer-lasting line than one applied with a single pass from a fat group like a thirteen round. I also simplified the hand a little, keeping enough branches to show the bone/branch relationship, but making the hand itself more readable. In addition, I thought that the dark blob behind the hand was distracting, so I softened it to allow it to unite with the rest of the background elements.

In addition, you can see how I've made the lines in some of the background elements drop out as they pass behind foreground shapes. For example, look at the wrist bones of the skeleton hand where they go behind the hair. This kind of selective dropping out of lines can really help show what objects are in the foreground and which are off in the distance. It's a practice made easier if you think about it ahead of time during the drawing phase, with the dropouts being included in the stencil.

There's some color linework in the piece as well. Not all artists like to outline with color, and some flat out refuse to do it, claiming that color lines are unreliable. This is only partly true, though. Color lines will lighten a lot more during the healing/settling process than black, and may have more blowouts and dropouts than black lines unless applied with great care. There are also colors such as blue, green and purple that will generally be more reliable across the years than colors like orange and medium brown for lining purposes. In this piece, there are a lot of green lines, which work well in this context and are mainly supported by green shading. I've given the leaves stronger lines than the far background, but not as strong as the face; notice how the lines for the undersides of the leaves are black while the upper sides have green lines. This is a strategy I use often if I want to give an element a color line but want to also ensure that it stands out enough.

The far background has been kept soft, with strong lines eliminated so that there is no competition with the hand and face. I've taken care to avoid background clutter in key places such as near the hand or lips. Throughout the piece, I've aimed to do this everywhere: Strong lines in the foreground, lighter lines for secondary elements, lightest or hidden lines in the far background, with the goal of avoiding background clutter where important things are happening in the foreground. If these principles are applied during the drawing phase, the design will be simpler, cleaner, easier to read and easier to tattoo.

I want to thank Cecelia for submitting this piece for critique. In the shop where she works, she is trying to get the other artists together regularly for a critique night, which can be fun and helpful at the same time, and give participating artists a way to measure their own growth.