What about this scar

Welcome to my column! I've had some interesting feedback so far, but if anything stands out it seems that a lot of people, both artists and collectors, are curious about coverup work. With such radical improvement happening in the quality of tattooing overall, more and more people are wanting to upgrade and even replace parts of their tattoo collections. In last month's column we talked about coverup a bit, including the use of a laser. As long as we're on the coverup topic I'd like to focus a bit on dealing with scarring, since scar coverups involve some novel challenges- and opportunities.

I'd love to hear your questions, or your feedback on this or previous columns. Hit me up at askguy@guyaitchison.com.

Q: Hey, Guy. I've got some scars on my arm- they happened in my welding shop, where my upper arm came into contact with a red hot metal edge, twice. It actually looks like a giant cat claw mark, and it stands up one or two millimeters off the skin in places. It's about three years old and doesn't seem to be flattening out. I've gone into a couple tattoo shops, and the first artist (who does nice work) told me it couldn't be done, and that the scars would pop right out of the tattoo. The second artist seemed pretty enthused about trying something out, but I'm afraid of having a mess. I only have one very small tattoo right now, on my ankle, and I'm not sure I'm ready to go huge with this. What do you think my best options are?

A: Scar tissue does represent a different kind of coverup project, with a different thought process. Scars are usually textured or even big and thick, possibly shiny or plastic-like, as with the so-called hypertrophic scars on your arm. They are not like normal skin, and react differently to getting tattooed. But with the right approach it can be done. As with any coverup project, the objective is to make the most of what you are working with, taking advantage of the way that the scar fits on the body and trying to make that function as a design element that works for you.

What makes long shiny scars like yours so challenging is the strong directional element that they create in the design. In your case, the burns actually are pointed in a nice diagonal direction that flows well with the arm (Fig. 1). Horizontal or vertical scars are far more of a challenge to incorporate into a flowing design. Because ultimately that is what you are doing- incorporating the scar into the tattoo, rather than covering it. You can't really cover it, since the tattoo will reside in the same layers of skin that make up the scar. But you can decorate it in a way that makes the scar into something attractive, something that serves as art rather than damage. 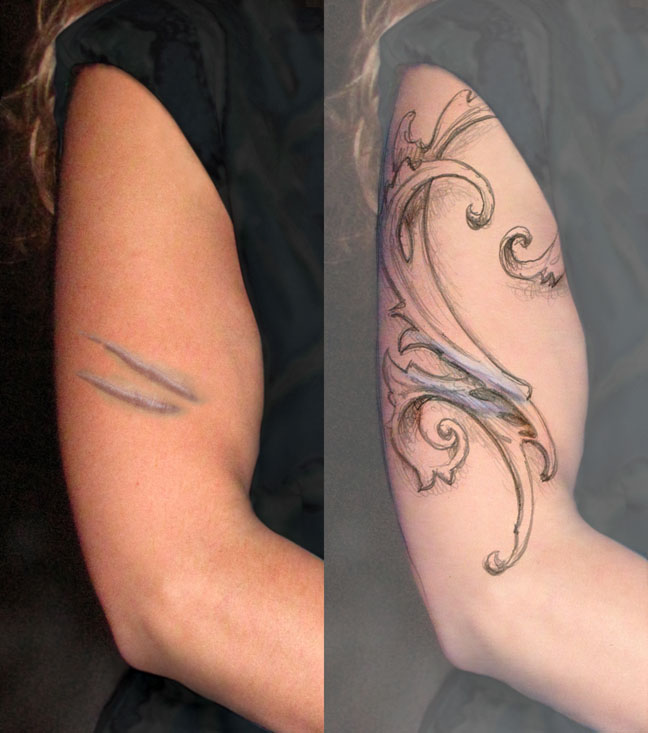 Fig. 1&2: Long shiny scars like this can't just be covered with any tattoo; instead, they need to be concealed in a design that incorporates their shape


Now we haven't talked about design style or anything like that, so the example I'll show you is a motif that's become popular in recent years- flowing Victorian style ornament (Fig. 2). This type of design work can easily be made to fit around your scarring in a way that conceals it effectively. It can also be carried around the arm selectively, distracting from the scar without taking over the arm with a heavy design, as you mentioned earlier. It could be done in any color, but monochrome or black and gray would work well in hiding the scar, using some opaque grays to blend with the scar's discoloration.

After healing, you should expect the tattoo work that's directly on the scarring to fade a bit more than usual- these areas may require a second pass. In fact, with all scar coverup projects, you should expect the need for at least two passes to get the best results, since healing results can be unpredictable and uneven. In addition, the scar itself may continue to fade as the years pass, which could effect how it reads across time. If it requires a touchup a decade down the road, though, that's a small price to pay for the benefit the tattoo could bring you.

In Fig. 3 is an example of a different kind of scar. This one is also a burn scar, but was the result of splashing hot liquid instead of contact with a straight hot edge. Burn scars like these tend to be chaotic and organic, and are actually easier to hide with a tattoo than the straight ones on your arm. This example is another one where the client wasn't looking for large coverage; in fact, it was her first tattoo, which she was a little nervous about. So I aimed to create a design that hid the scar effectively but left untouched as much of the surrounding undamaged skin as possible. 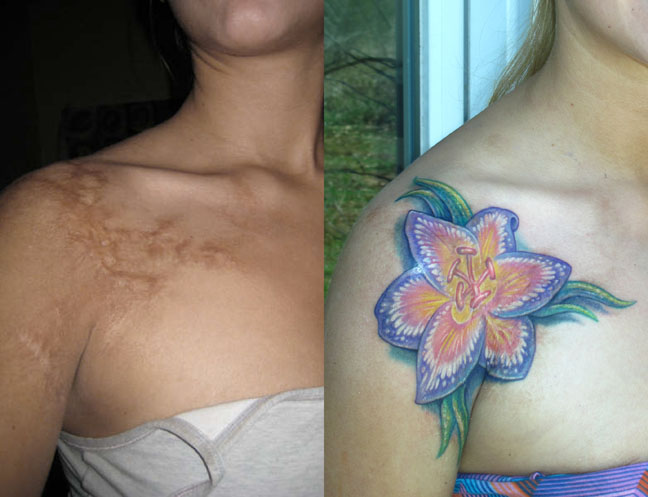 Fig. 3&4: This burn scar was caused by a splash of hot coffee. Its organic quality made it fairly easy to incorporate into a colorful flower design


It was an old scar, dating from childhood, so it had already faded as much as it was going to. As a general rule I won't work on a scar that hasn't had a year or more to settle, but a decade or more is even better. This one had shiny spots and dull spots, and some bumps that were raised slightly from the skin. I took care to lay out the flower in a way that didn't run any long smooth lines directly across any especially bumpy zones. But flowers are flexible, and it this one fit the scar nicely without taking over her entire shoulder (Fig. 4). This photo shows it after a second pass. The first one held the ink nicely but there were some faint spots in the shiniest areas, which the second pass dealt with.

Some scars are far bigger challenges and really can't be hidden at all, but beautified instead. I've done a number of large tattoos like these, where a whole sleeve or more of heavy third degree burn scarring was covered with organic abstract tattoo work. Fig. 5 shows an example of this kind of scarring, which happened during a firefighter's training exercise. This person's burns were so intensive that he lost fingers on both hands. In these kinds of cases the healing is handled a little differently, and graft tissue is applied that forms a kind of organic grid pattern, as you see here. This helps healing but eliminates all smooth areas at and serves as a real challenge in designing a coverup piece. 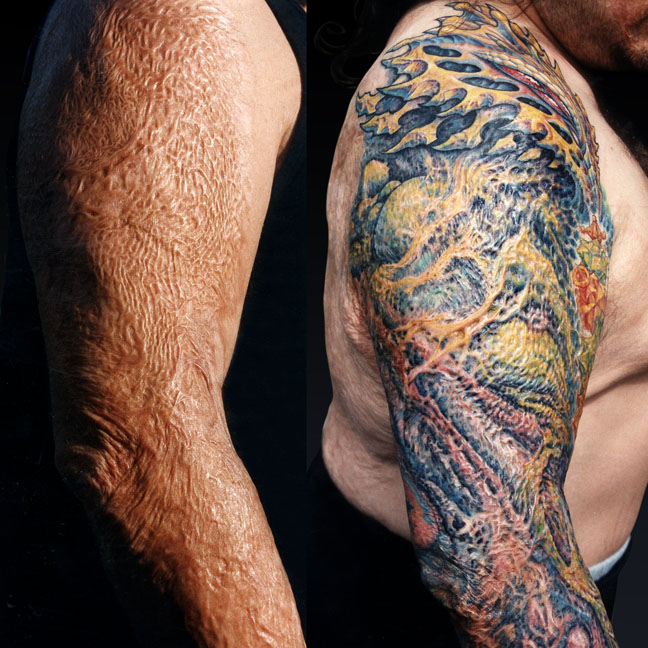 Fig. 5&6: In this collaboration I did with NY tattooist Jon Clue, we took advantage of the high-profile scarring to create a very unusual and striking look.


Fortunately, many collectors are open to getting abstract organic work, which is ideal for this kind of project (Fig. 6). The scarring was looked at as an artistic foundation, then flowing organic shapes were brought out from the texture of the scars and then shaded and colored in a way that incorporated the texture of the scarring. Because the skin has taken on such a thick and platicky texture, with very thin tissue-paper-like areas between the hard plastic bumps, the work had to be put in slowly and methodically, with extra care not to damage the thin areas. Several healed passes gave us a very striking look that settled nicely and has a look unlike any other tattoo you'll ever see.

The heavily burned clients that I've done work on like this have all commented that the tattooing gave them a new sense of freedom, of not feeling like they have to hide, but can instead flaunt who they are. I could imagine patients from burn clinics being handed pamphlets showing the possibilities of what could be done, along with a referral link to artists specializing in this kind of work. In a perfect world, perhaps.

Even a good coverup won't always hide the fact that there is a scar there. As with the sleeve example above, in some cases you are just making the scar into art without even trying to hide it. In other cases, though, the scar can be hidden very effectively so that only under the closest examination would it be visible. Either way, a good scar coverup provides the collector with a chance to reclaim skin that has been damaged, beauty that has been lost. As such it can be so much more than just a tattoo.