After 7 years of filming, Durb's friend Russell Dornhecker has released a documentary about the Hell City Tattoo Fest. It's a visual feast featuring the tattoo artists, collectors, performers, painters, showmen and downright characters that populate the Hell City Fest. Whether you've had a chance to attend the festival or not, you'll be entertained by this powerhouse film. Approx. 1 hour and 15 minutes

Michele and I once hosted an event called Innerstate at one of the Hell City Fests- you'll find a couple minutes of it in the Hell City documentary. We produced our own film about the Innerstate event, which features profiles of 40 tattooists working in a high-pressure environment over a 5 day period to create a group of masterwork paintings. The 50 minute documentary comes with a 100 page softcover book that has large format color plates of the paintings, along with chapters showing the artists working all week to create them. Since Innerstate and Hell City share such a strong relationship, we're now offering a bundle that includes both films and the book, at a discount price. A must for any tattoo library! 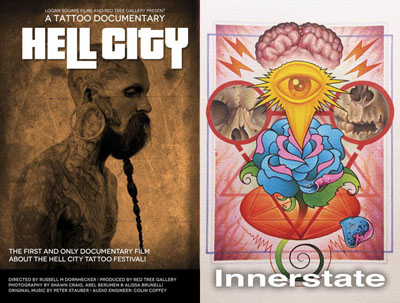