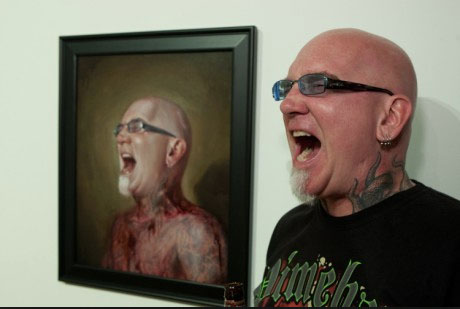 Bob posing next to a portrait by fellow tattooer Shawn Barber

Having an incredible artist for a father, Bob Tyrrell grew up wanting to be an artist himself. He started playing guitar in his teens and gave up art completely to pursue a career in music. He spent the next fifteen years playing in heavy metal bands and working a factory job. He’d wanted to get tattooed for years and, just shy of turning 30, got his first tattoo. Naturally, he was hooked and got his sleeves and a full backpiece done within a few years. During this time he got back into drawing and took a few art classes. Now it was time to learn how to tattoo!

Bob took some drawings to Tramp Welker, the owner of Eternal Tattoos, who are based in the Detroit area where he grew up. Bob was offered an apprenticeship, and within three months he had quit his factory job and was tattooing full time. He was 34 years old when he started – a little late in the game, but better late than never! Tom Renshaw was working there and took Bob under his wing. Tom went WAY out of his way to be helpful, and really pushed him those first couple of years. Bob feels that he's learned more from Tom than anyone in the business, and will be forever grateful to him and Tramp.

Bob stayed at Eternal for six years. He is currently working on the road doing tattoo conventions and guest spots at tattoo shops. In Bob's words: "I guess I finally grew up and became an artist – my original plan as a kid. I think I found my true calling. I want to cut back on traveling a little so I can learn how to paint, do more fine art and tattoo more, but I just can't stop! I’d like to thank all my friends who’ve helped me become a better artist. There’s way too many to name, but I’ll name a few: my father Robert J. Tyrrell, Paul Booth (still my biggest influence and favorite tattoo artist), Robert Hernandez (fucking amazing!), Guy Aitchison, Filip Leu, Shane O’Neill, Jack Rudy, Jay Wheeler, Jimé Litwalk, Joe Capobianco, Gunnar, everyone at Last Rites, Mario Barth, Shige, Brian Everett, Boris, Deano Cook, and a million other artists – you know who you are! Thanks for the never ending inspiration."

You can find Bob's first DVD, Method To My Madness, here at Tattoo Education.